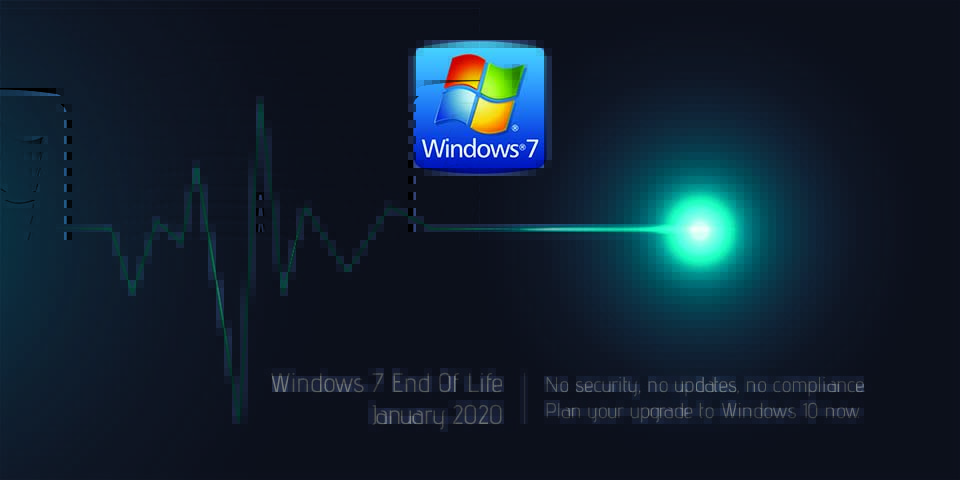 Since its launch on 22nd July 2009 Windows 7 has been the operating system of choice of many businesses, with a visual refresh and a host of new features it soon became favoured, and loved, by many.

Holding a number of records, including the highest grossing pre order in Amazon’s history, surpassing the previous record holder of Harry Potter and the Deathly Hallows. Two weeks after its release it surpassed the market share of Apples Snow Leopard and by July 2012 it had sold over 630 million licenses.

Sadly, as with all things support for Windows 7 is coming to an end. Microsoft will be ending support for this popular operating system on the 14th January 2020.

It is likely that hackers will take this opportunity to write     malware and viruses to take advantage of unpatched vulnerabilities in the unsupported operating system and wreak havoc.

It is time to migrate to Windows 10.

The transition to Windows 10 requires analysis of your existing devices, some will be capable of being upgraded, others will need to be replaced.

The deployment of Windows 10 may be an opportunity to leverage the cloud benefits of Azure Active Directory and InTune to provide a suite of tools for complete device management.

The key steps to deployment are:

3) Audit your applications and check compatibility.

4) Build a cost case for upgrade or replacement.

5) Inform and train staff on the changes they will see.

6) Monitor performance as you migrate.

With a successful migration to Windows 10 you will maintain high levels of security and compliance. You will also be able to leverage new tools and features in the new operating system and in the cloud.

This website uses cookies to improve your experience while you navigate through the website. Out of these, the cookies that are categorized as necessary are stored on your browser as they are essential for the working of basic functionalities of the website. We also use third-party cookies that help us analyze and understand how you use this website. These cookies will be stored in your browser only with your consent. You also have the option to opt-out of these cookies. But opting out of some of these cookies may affect your browsing experience.
Necessary Always Enabled
Necessary cookies are absolutely essential for the website to function properly. This category only includes cookies that ensures basic functionalities and security features of the website. These cookies do not store any personal information.
Non-necessary
Any cookies that may not be particularly necessary for the website to function and is used specifically to collect user personal data via analytics, ads, other embedded contents are termed as non-necessary cookies. It is mandatory to procure user consent prior to running these cookies on your website.
SAVE & ACCEPT